CK started training with me 12 years ago, when she was 38 years old. At the time she had two children — 3 and 5 — and was a stay-at-home mom. With a family history of diabetic complications, her doctor had warned her that she was already at a pre-diabetic stage and needed to address her weight and blood pressure sooner rather than later. CK was referred to me by another student — a doctor who had treated her husband — and knew she was interested in starting a training program. He also knew that like himself, she had tried several training regimens and trainers in the past, and hadn’t kept with it. We put CK on a program that included Muay Thai and StrongFirst Kettlebell training… and she killed it! She discovered that training could be something to look forward to, as well as something good for her. As the early days became weeks, then months, then years of consistent training neither CK, her friends nor her doctor could believe the changes in her health and physical composition.

Fast forward ten years. CK had been back in the workforce for some time, working behind the scenes in the television industry. Her job required lots of time sitting at a computer, behind a desk, on the phone. Training continued to be a regular, consistent part of her schedule and she diligently maintained her practice and her health. Then the mysterious pain and decreased mobility started, first in the left and then the right shoulder. Nothing seemed to cause nor alleviate the issue, and CK consulted a number of medical professionals who explored a variety of possible culprits from overuse, sleeping habits, injury, workplace repetitive stress, etc. In the end the diagnosis was adhesive capsulitis: frozen shoulder. Doctors are unclear as to what causes this condition, although immobility from injury can sometimes be a contributing factor, and it is most likely to affect women over 40. They do know that the shoulder capsule of connective tissue encasing the bones, ligaments and tendons of the shoulder thickens and tightens around the joint, restricting movement and causing intense pain. The symptoms typically begin gradually, worsen over time then usually resolve within one to three years. In CK’s case, her pain had increased, and mobility decreased to the point where she couldn’t lift her arms even to parallel. It had become an endless source of frustration and depression and prevented her from training in the manner she has grown to enjoy. Her doctor, physical therapist and I were all communicating, but conventional treatment involves primarily controlling pain and preserving as much range of motion as possible. She would see her physical therapist for massage and dry needling and me for primarily lower body movements that didn’t cause her pain — but she was increasingly frustrated, discouraged and in agony.

Then I attended the Flexible Steel Level 1 and 2 Certifications with Jon Engum. I saw some amazing increases in mobility by students at the cert and decided that CK might benefit from the Flexible Steel treatment. I followed the template for releasing the shoulder to the letter and the results were extraordinary; not just in terms of mobility gains, but also in the pain relief that she experienced. The process was straightforward and the results immediate:

In CK’s case, this was more of an exercise in frustration than anything as she could not perform most of the movements. But I kept it light, joking a bit (we’ve been training together for over a decade, after all!) We stayed with the basics: neck extension and flexion, neck tilts, neck rotations, elbow circles, shoulder rotations, Egyptians, tea cups…all with such a severely limited range they were barely recognizable. Then some lower body to complete the warm up. More importantly, I was already getting good information on how limited her movement was and how quickly she felt pain.

Before proceeding with the program, itself, we took a simple baseline in order to track any helpful or unhelpful movements. The test is simple enough: I asked CK to hook her thumbs together in front of her body, keep her elbows straight and locked and lift her arms up overhead. The picture shows the limit of her movement is chest height. Then the fun started.

Flexible Steel treats the body as one piece, not a collection of parts — everything is connected. So, we started by trying to get a little more movement at the bottom: in CK’s ankles. I had her stand tall and helped her to balance. She curled her toes under, placed them on the ground and imagined trying to kick the floor with her instep. CK transferred her weight to the “kicking” foot and pumped to increase then decrease the ankle stretch 10 times, then switched to the other foot. We then repeated the process on both feet, changing the direction of the pump to down and toward the outside. The shoulder retest already showed an increase in range and decrease in pain; she was now able to raise her arms so that her hands reached just below nose level.

Flexible Steel suggests the Bretzel is the ideal next step, but CK simply didn’t have the mobility necessary for that movement. So, we used a regression, the Rib Pull. CK started by lying on her right side, shoulders and hips stacked one on top of the other, with a yoga block to support her head. She bent her left knee and slid it up to above her waist line and held it there against the ground with her right hand. She then tried to make her right heel and the top of her head as far apart as possible. I stood in behind her lower back and braced with my foot and leg to minimize any lumbar movement. CK then reached across her body with her left hand, grabbed her right lower ribs, and rotated to her left, pulling on the ribs and rotating everything (head, neck, ribs) while keeping the right knee on the ground. CK spent some time here, breathing into the movement, working to increase her rotation. Then she did the same on the other side. She stood up and we retested…and you can see not only the increase in range (her hands got to forehead level, with some slight lean back) but the surprise on her face!

This was a difficult stretch for CK, given her limited range. But we gave it a try: she folded first her left hand back and placed her wrist on her hip. She then squatted while putting her left elbow against the inside of the left knee. CK then used her left knee to push her left elbow toward her right knee, staying there for about 30 seconds while contracting ands relaxing. The she repeated on the right side. When we retested, she was able to raise to the the forehead as before — but without the lean back cheat. 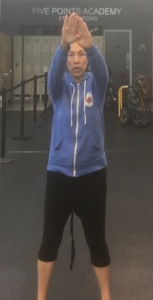 CK got flat on her back on the floor and extended her arms straight up. I hooked a VERY light (6 kg) kettlebell over both her thumbs so that the base rested against the insides of her forearms. CK locked her elbows, engaged her lats (I encouraged her to think about breaking the bell handle) and slowly lowered the bell back and down toward the ground above her head. She felt pain and started to hunch her shoulders long before reaching the floor. I assisted bringing the bell up and she slowly lowered to her maximum point and hung out breathing there for a bit. We repeated about 10 times, then I took the bell and CK stood up. When we retested she actually got her arms to where there was some daylight visible between her hands and her head. It was also possible to clearly see the point when the worse shoulder (her left) started to reflexively hunch up against the pain and pull her unevenly to the side.

CK stood and prepared to do the baseline test. I positioned myself off to her side, placing one hand on her upper back and the other on the back of her wrists. She raised her arms to max lock-out while I very gently tried to push her back down out of position. After a few seconds I removed my resistance, allowing her to move her arms to her new max, then we repeated until there was no more gain. The baseline retest showed that CK was able to lift her arms above her head, almost uniformly. And of more significance to me, she was able to do it without pain, for the first time in months. I’ve been very happy with the training and progress we’ve made over the years, but I can’t think of anything that made me feel better than CK tearing up in surprise and relief at being able to lift her arms above her head, pain-free. We continue to use the Flexible Steel toolbox, and CK continues to improve. 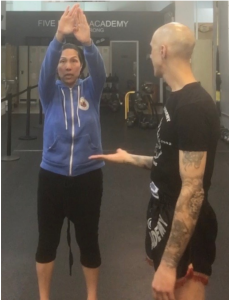 One Reply to “Defrosting the Shoulder with Flexible Steel”

What is Flexible Steel

Flexible Steel is a mobility/flexibility system that does not sacrifice strength for mobility or mobility for strength.